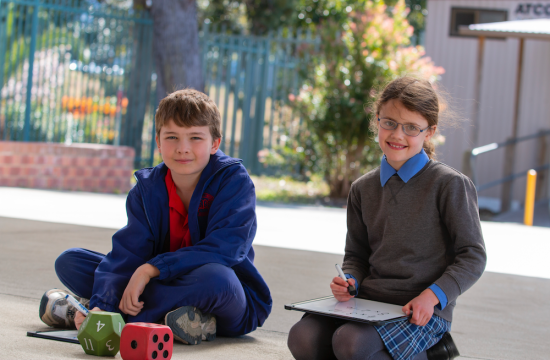 There are three classes in each year level from Kindergarten to Year 6. There is a Learning Support Program for children with special needs and an Autism transition unit. In addition to class teachers, there are specialist teachers in Physical Education, Music and Library. All children attend these classes throughout the year.

The principal is responsible for administering the school and is assisted by the assistant principal and the leadership team.

The school has support staff including two school secretaries, Aboriginal Education Assistants, a Defence School Transition Aide and a team of learning support assistants who support teachers and children in classrooms. Each year parents are informed of the names of school staff and any changes. Meet our staff here.

Read more about What We Offer at St Michael's and Take a Virtual Tour of our school.

In 1893, at the request of Cardinal Moran, the Sisters of the Good Samaritan came to Nowra to begin their work of providing a Catholic education to the parish of St Michael’s. They continued the work of the Reynolds sisters, who in the 1870s had established a Catholic school in a house in Douglas Street.

In 1918, the new brick St Michael’s Convent School incorporating the parish hall was opened by Archbishop Kelly. This North Street building which is now the 'Parish Centre', together with the ‘old weatherboard’, housed the primary and secondary school of the parish until the arrival of Monsignor John Purcell in 1956.

Monsignor Purcell, with great energy and foresight, embarked upon a building program to cater for the needs of the steadily expanding district. Over the next four decades, new classrooms, the library, administrative offices and parish hall were built.

In 1992, the Wollongong Catholic Education Office appointed St Michael’s first lay principal, Mr John Tubridy, to succeed Sister Geraldine Kearney SGS. Although there are no longer any Good Samaritan sisters teaching at the school they remain active in their apostolic work within the school and parish.

Today, St Michael's Catholic Primary School carries forward the traditions set by the priests, sisters and people of the parish since 1893. We reflect with appreciation and gratitude on their lives and faith.

‘In all things may God be glorified’

A Catholic School in the Diocese of Wollongong

Catholic schools have a long and proud history in the Australian educational landscape. Originally established by orders of brothers, nuns and priests in the nineteenth century, they are now almost entirely staffed and led by lay people.

Catholic systemic schools in the Diocese of Wollongong are either parish primary schools like St Francis of Assisi, or diocesan secondary or K-12 schools. They are all co-educational schools. (The diocese also has another seven independent congregational secondary schools, some of which offer single-sex education.)

Catholic schools have a unique character because as well as being places where learning is highly valued, they are places where priority is given to a values-based education in the Catholic faith. This involves all staff and students proclaiming the Good News of Jesus Christ to the world. Staff identify strongly with their school and take pride in their work and the school’s achievements.

Take a Virtual Tour of Our School